Are Dark Photons the Secret 'Fifth Force' Holding Our Universe Together? 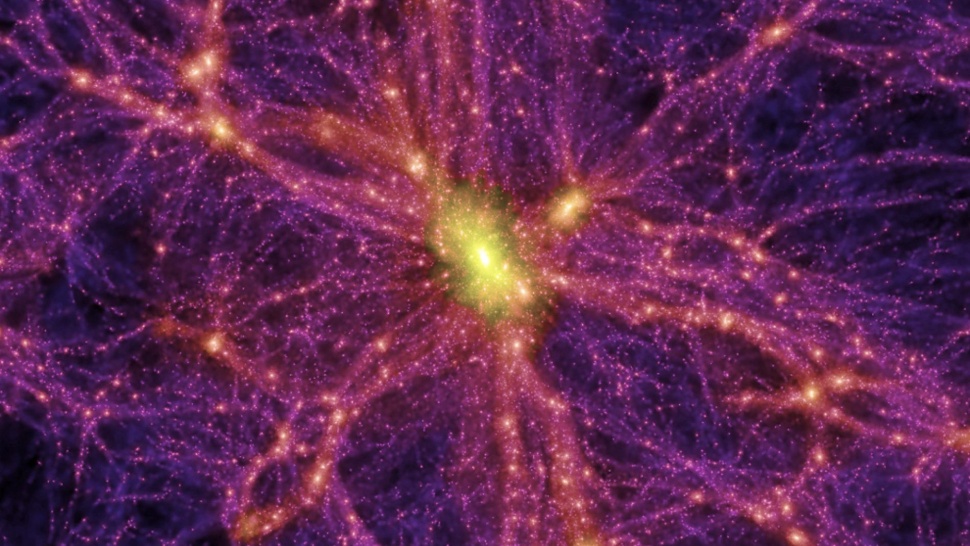 Physicists on the hunt for the invisible hand that shapes our universe and the galaxies within it have turned their gaze to the dark side.

Physicists on the hunt for the invisible hand that shapes our universe and the galaxies within it have turned their gaze to the dark side. Specifically, one team is looking behind every cosmic rock for so-called dark photons, which could transmit a previously unknown force of nature.

These photons would mediate the interaction between all normal matter and the invisible stuff called dark matter.

But scientists have long understood that nature is stretched and pulled and smushed and torn by four known forces, so how could another force have hidden from us for so long? Those four known forces make up the cornerstone of our everyday existence: the tyrannical but short-ranged strong nuclear force, which binds atomic nuclei together; the obscure and whisper-quiet weak nuclear force, which controls radioactive decay and talks to the subatomic particles called neutrinos; the bold and bright electromagnetic force, which dominates our lives; and the subtle gravitational force, by far the weakest of the quartet.

Using these four fundamental forces, physicists are able to paint a portrait of our subatomic and macroscopic worlds. There is no interaction that doesn't involve one of those four characters. And yet, mysteries still abound regarding interactions in our universe, especially on the largest scales. When we zoom out to the scale of galaxies and beyond, something fishy occurs, and we give that fishiness the name of dark matter.

Is dark matter simple and unadorned, or does it hide a host of previously unknown forces in its clutches? Now, an international team of physicists, describing their work online in the preprint journal arXiv, have used a data dump from the Large Hadron Collider — the world's biggest atom smasher — to look for such a force. For now, their search has turned up empty — which is good (sort of): It means our known laws of physics still hold. But we still can't explain dark matter.

Lost in the dark

Dark matter is a hypothetical form of matter that is said to account for around 80% of the total mass of the universe. It's kind of a big deal. We don't really know what is responsible for all this extra invisible stuff, but we know it exists, and our biggest clue is gravity. By examining the motions of stars within galaxies and galaxies within clusters, along with the evolution of the largest structures in the cosmos, astronomers have almost universally come to the conclusion that there's more than meets the galactic eye.

A better name for dark matter might be invisible matter. While we can infer it from its gravitational influence (because nothing escapes Albert Einstein's all-seeing eye), dark matter simply doesn't interact with light. We know this because if dark matter did interact with light (or at least, if it interacted with light in the way that familiar matter does), we would've seen the mysterious substance by now. But as far as we can tell, dark matter — whatever the heck it is — doesn't absorb light, reflect light, refract light, scatter light or emit light. For dark matter, light is simply persona non grata; it might as well not even exist.

And so there's a solid chance that legions of dark matter particles are streaming through your body right now. The combined mass of that endless stream can shape the destinies of galaxies via gravitational influence, but it passes through normal matter without even a hello. Rude, I know, but that's dark matter for you.

Since we don't know what dark matter is made of, we're free to make up all sorts of scenarios, both mundane and fanciful. The simplest picture of dark matter says that it's big and basic. Yes, it makes up the vast majority of the universe's mass, but it consists of only a single, highly prolific particle that does nothing else but have mass. That means the material can make itself known through gravity but otherwise never interacts through any of the other forces. We'll never, ever catch a glimpse of dark matter doing anything else.

The fanciful scenarios are more fun.

When theorists get bored, they cook up ideas for what dark matter could be, and more importantly, how we could detect it. The next level up on the scale of interesting dark matter theories says that the substance can occasionally talk to normal matter via the weak nuclear force. That idea motivates dark matter experiments and detectors around the world today.

But still, that scenario assumes there are still only four forces of nature. If dark matter is a previously unseen kind of particle, then it's perfectly reasonable to suggest (because we have no idea if we're right or not) that it comes packaged with a previously unknown force of nature — or maybe a couple, who knows? This potential force might let dark matter talk only to dark matter, or it might intertwine dark matter and dark energy (which we also don't understand), or it might open up a new communication channel between the normal and dark sectors of our universe. Rise of the dark photon

One proposed communication portal between the light and dark realms is something called a dark photon, analogous to the familiar (light) photon of the electromagnetic force. We don't get to see or taste or smell the dark photons directly, but they might intermingle with our world. In this scenario, dark matter emits dark photons, which are relatively massive particles. This means they have effects over only a short range, quite unlike their light-bearing counterparts. But occasionally, a dark photon could interact with a regular photon, changing its energy and trajectory.

This would be a very rare event; otherwise, we would've noticed something funky going on with electromagnetism long ago.

So, even with dark photons, we wouldn't be able to see the dark matter directly, but we could sniff out the existence of the dark photons by examining gobs of electromagnetic interactions. In a tiny fraction of those gobs, a dark photon could "steal" energy from a regular photon by interacting with it.

But like I said, we need gobs of interactions. It just so happens that we've built giant Machines of Science to produce exactly that, so we're in luck.

In the arXiv paper, physicists reported their results after examining three years' worth of data from the Super Proton Synchrotron, the second-largest particle accelerator at CERN. For this experiment, the scientists smashed the protons against the subatomic equivalent of a brick wall and looked at all the pieces in the aftermath.

In the wreckage, the researchers found electrons — lots of them. Over the course of three years, scientists counted over 20 billion electrons with energies over 100 GeV. Because electrons are charged particles and like to interact with each other, the high-energy electrons in this experiment also spawned a lot of photons. If dark photons exist, then they should sometimes interact with and steal energy from one of the regular photons, a phenomenon that would show up in the experiment as a lack of light.

This search for dark photons came up empty — all normal photons were present and accounted for — but that doesn't entirely rule out the existence of dark photons. Instead, it places limits on the allowable properties of these particles. If they do exist, they would be low energy (less than a GeV, based on the results of the experiment) and would only rarely interact with regular photons.

The search for dark photons continues, however, with future runs of the experiment set to home in even further on this proposed creature of the subatomic world.